This exhibit invites everybody on a magical trip from the cradle of European culture to the landscapes where nature is king. It would seem an impossible mission to truly capture life in the poor areas along the Ganges, in the extremities of the Nile, or in an isolated corner of the Andes but Japanese photographer Kazuyoshi Nomachi succeeds. His playful photography bridges the distances to record both the beauty and opposition of these many different worlds.

Nomachi’s Soul lands is the artist’s largest anthological exhibition. With approximately 200 shots, the path of the exhibition, divided into 7 sections, tells us about the journey of a lifetime  through the sacredness in  everyday life, an experience lived by the artist in far distant lands, but linked by that spirituality giving a rhythm and a sense to the harshest conditions. Only Nomachi is able to grasp this spirituality in landscapes of unique and amazing beauty, where portraits and human beings acquire an absolute dignity blending themselves with the environment in almost pictorial compositions, controlled by a dazzling light, real and transcendental at the same time. A surprising set up, designed by Peter Bottazzi, offers the visitors a fascinating and captivating path. 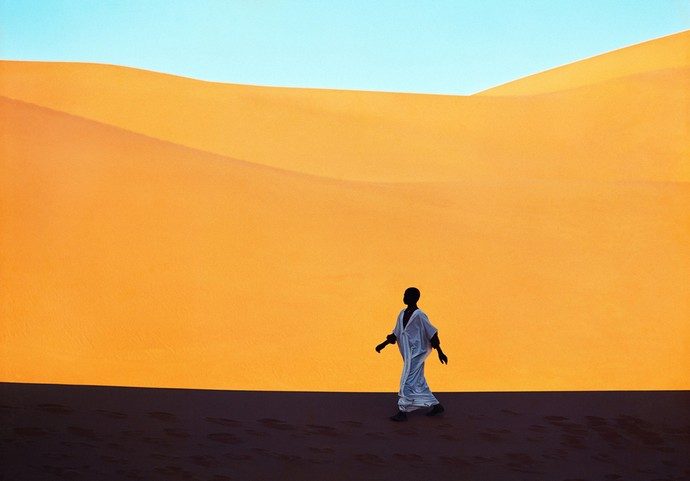 Sahara. “The power of Sahara does not only come from the hugeness of its space. Up to a few thousand years ago, it was a wet area, as the images of life and animals carved 8.000 years ago in the rock of the mountain areas tell us. When in 1972 I first visited Sahara, I was literally conquered. When I went back there, I perceived its true nature, barely visible, as if hidden behind a veil”. 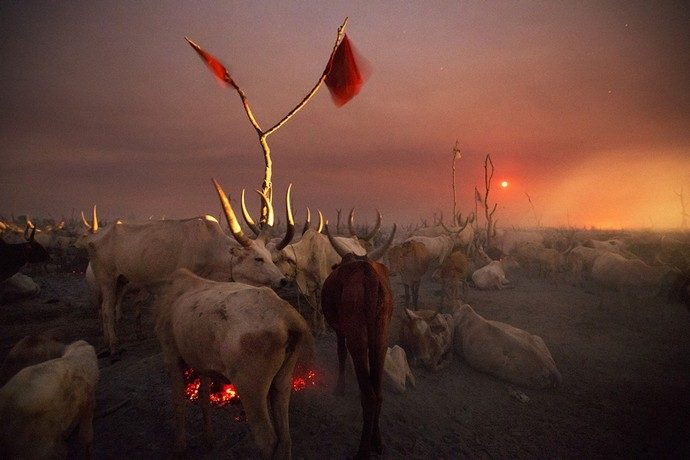 Nile. “I was thirty-four years old, in October 1980, when I began to explore the lands along the Nile. In southern Sudan, I found a tribe of shepherds living in close contact with a herd of cattle, as in prehistoric times. After thirty-two years, their way of life has remained basically the same, including the habit of sprinkling upon themselves the ashes of animals’ dung in order to find protection from insects”. 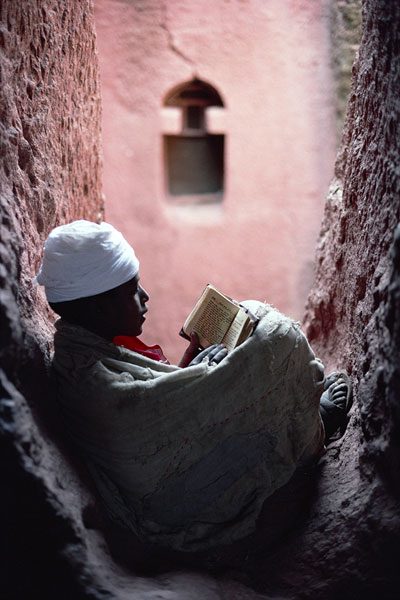 Ethiopia. “Ethiopia alternates steep highlands to semi-desertic areas where there are 83 ethnic groups. In an isolated plateau, surrounded by the “Islamic sea” of the scorching desert, a Christian culture survived, bequeathed from the first centuries after Christ. In those troubled mountains I could visit rocky churches and monasteries where the faithful still keep on presenting offerings as in the Bible’s time”. 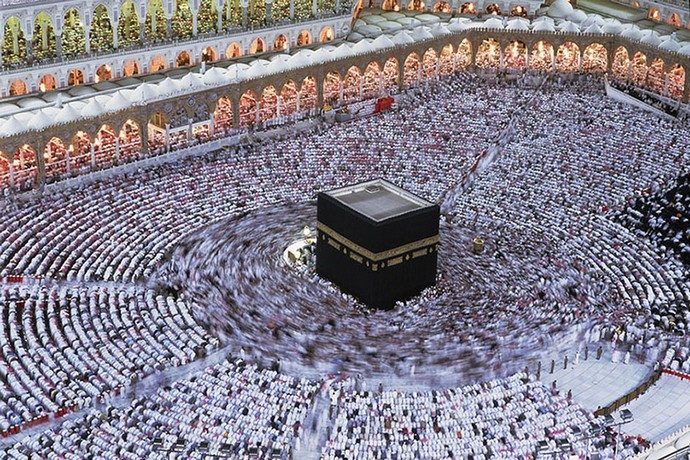 Islam. “The Islamic faith, teaching the devotion to one God, Allah, was founded in the seventh century by Muhammad. Among the basic obligations prescribed by the Koran, there is the pilgrimage to Mecca, where the Kaaba stands. I had the privilege to photograph it thanks to the invitation of a Saudi editor. The Shiite Muslims are concentrated in Iran, whose faith is affected by the religion of ancient Persia”. 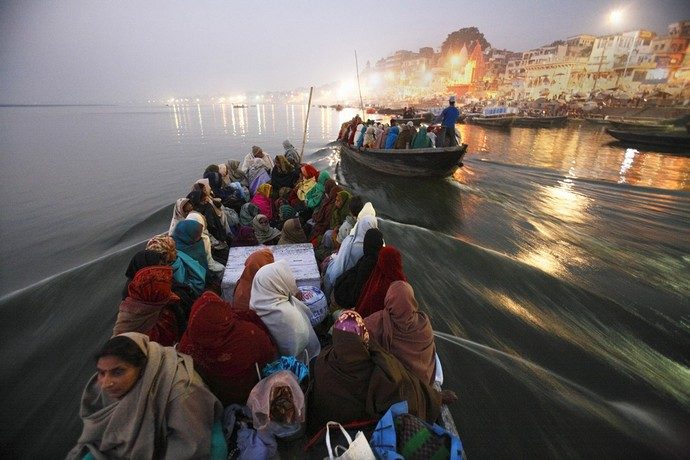 Ganges. “The Ganges is born in the Himalayan glaciers and flows into the plains of India up to the Bay of Bengal. Its waters, linked to the cult of Shiva, washes away the sins of those who dip themselves in and helps them be reborn in the sky. The river water also frees from the sufferings of reincarnation those who spread their own ashes in it. I visited various holy sites, including many of them lining its shores, constantly crowded by pilgrims”. 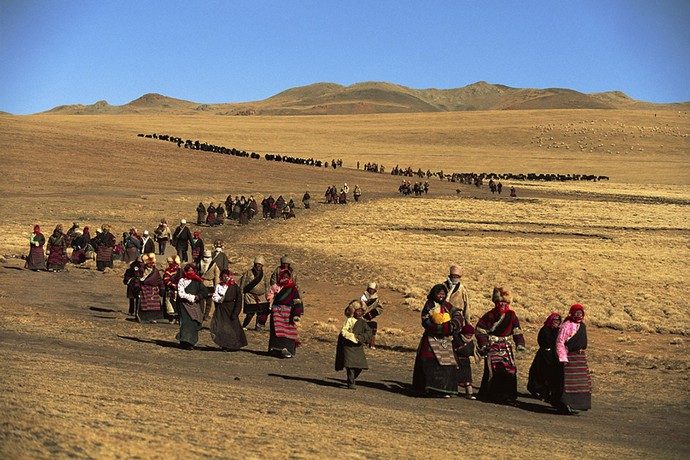 Tibet. “My first trips to Tibet dates back to the end of the 80’s. Tibetans are devoted to Buddhism, revisited upon a strong sense of their own. Western people are turning more and more to tibetan Buddhism for the gentle optimism that characterizes it. The equality among human beings is also recognized taking in consideration even the extreme environmental conditions of Tibet”. 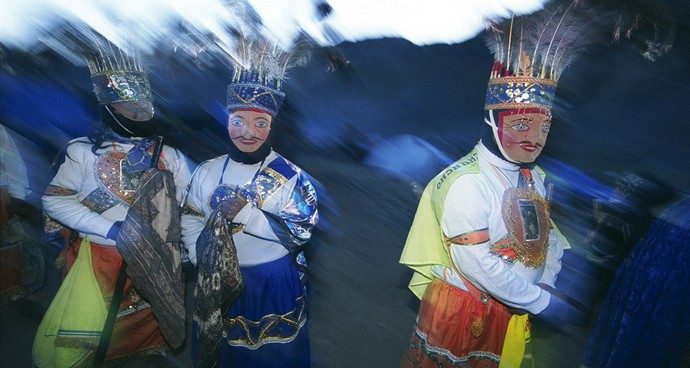 Andes. “Before the discovery of Christopher Columbus, in the Andean plateau  an original civilization had developed. The Andean people were largely converted to Christianity, but they managed to mix into the new religion the elements of their traditional beliefs. The appearance of Jesus on a peak in the Peruvian Andes is the reason for the pilgrimage of Qoyllur Erect, which I witnessed in 2004”.