Often when we think of the renaissance master pieces we tend to think of Florence. Truly that is where also Leonardo Da Vinci (1452–1519) studied. But it is in Milan where he spent a significant amount of his professional life, and where the world’s most famous religious painting is found. A visit only by reservation. Maybe because of that I had lived in Milan two years before going to see it, but I can assure you that whether you are going to live in Milan for years or visit the city only for one day, as much as his Mona Lisa, The Last Supper is a must see for all art lovers.

The man Da Vinci mainly worked for during his time in Milan, Duke  Ludovico il Moro got  built Santa Maria delle Grazie church with a convent, and commissioned his trusted art master to paint il Cenacolo or L’ultima cena (by its original names) in it. The mural was painted between 1495 and 1499, in the dining hall of the convent filling the entire end wall (460cm × 880cm). Unlike working on a fresco where the pigment dries almost immediately, Da Vinci wanted to experiment a new method of painting on a plaster on which he applied materials that kept the oil and tempera fresh longer allowing him to keep working extended time on details. However this method didn’t prove to be durable, thus there is little left of the original colours despite of remarkable preservation efforts. It is now a UNESCO’s world heritage site and a property of the city of Milan. 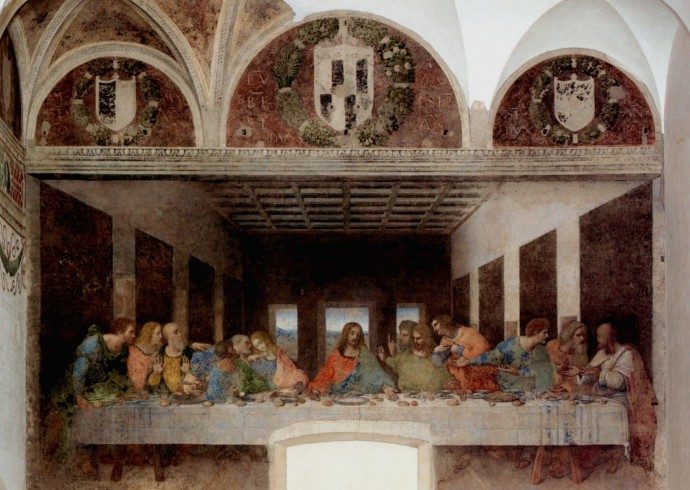 It portrays contemporaneously at least two moments recorded in the Bible: obviously the sacrament of the Holy Supper (Christ reaching to a glass of wine and a piece of bread), and the moment right after Christ has uttered the words “One of you will betray me.”, from the book of Mark 14:18, vividly describing the reactions of his twelve apostles to his shocking statement. While there are no classical signs of renaissance art of divine, with a brilliant use of space, perspective and symmetry in composition Leonardo illustrates Christ’s divinity and the eternal importance of the moment. But it is a feat of his artistic skills as much as it is his mathematical skills. This humanist artist evidently believed in psychological realism in religious art, as he used the Milanese from the streets as his live models to paint the dramatic reactions. Wanting the viewer be able to identify with the characters he even used the silverware used by the monks of the convey to paint the details of the table.

The fifteen minutes you are given to gaze and analyse it, are not enough to take in all the intensity of each emotion and motion that buzzes around the calm perfectly harmonious centre in divine triangle (hence Holy Trinity).  It is no wonder that the body language and those faces keep fascinating historians, artists and writers until our days.

To preserve the masterpiece by Leonardo da Vinci, access to the Last Supper it permitted only small groups of 25 people and only a few days a week. For this reason, to visit the Last Supper reservations are required.