If you’ve ever visited Piazza Oberdan in the center of Milan, you may have noticed two tall pillars on the two longer sides of the square. But you probably didn’t realize that one of the pillars serves a purpose and is not just merely for decoration. Hidden inside one of the concrete columns are the exhaust ducts of a boiler system that was used to heat the air and water underneath the square. 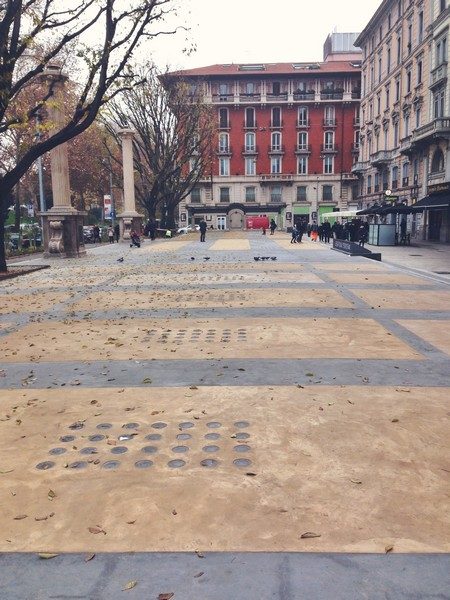 Ok, let’s start from the beginning.  The subsoil underneath Piazza Oberdan during most of the 20th century lodged a daytime hotel for travellers and residents of Milan. It was called Albergo Diurno Metropolitano (later renamed Albergo Diurno Venezia) and was a 1200m2 service center divided into two parts.

The major part housed a spa area that contained bathing cabins, showers with dressing rooms and public toilets. The foyer included hair salons, barbershops; a manicure station, travel agency, and a photographer office. You could also buy train tickets, deposit your luggage and store your bicycle in the facility.

There were many reasons why this daytime hotel existed. The first was that at the beginning of the 20th century (Albergo Diurno was inaugurated in 1925) not all homes had showers in their bathrooms and there was an essential need for a public place where you could clean yourself up. Also, travelling during this period of time was mostly by horse-drawn carriages or in open cars, so when you finally got off the dusty roads and reached your destination – not bathing wasn’t an option, hence another motive for a daytime hotel.

The spa closed in 1985 while most of the artisans closed their businesses in the middle of the 1990s. The last artisan to close his shop was the barber Carmine Aiello who had to stop working in the daytime hotel in 2006 due to a legal disagreement.

Today the Albergo Diurno Venezia has become a magical (and a bit spooky if I may say so) place that shows the rituals of a bygone era; and captures in an authentic way Milanese life back in the day. Thanks to FAI (Fondo Ambiente Italiano) the doors have reopened during some Saturdays in December 2015 and January 2016. You are welcome to join guided tours of approximately 30-40 minutes to get to know all the secrets of this hidden hotel.

Come early to reserve a slot when to enter – you are only allowed to enter in groups of 20 led by a guide.

I fell in love with Italy when I was seven, eating my first gelato in Monterosso al Mare. Eighteen years later, I left Sweden and now call Milan my home. I'm a foodie, I think uncertainty is bittersweet and feel most at peace when sitting on a rock by the ocean watching the waves roll in.