It’s here. EXPO 2015 kicks off in Italy on the 1st of May. Milan is centre stage for this year’s global exhibition: a six-month international event where 145 countries will showcase their most cutting edge technology and scientific knowledge relating to the production, supply, conservation and distribution of food. The theme is reflected in the title of the Expo: Feeding the Planet, Energy for Life. The colossal exhibition site, covering one million square meters, is expected to host over 20 million visitors.

The Universal Exposition is unique in several regards. For one, it is non-commercial. Secondly, it is more than just as large-scale exhibition; it is a place for industry, cultural and political players to meet. Ever since the first Expo in 1851, which was hosted in London, the aim of the event has always been to highlight changes that affect people on a global scale. Past editions have focused on topics such as transportation, education, war and the arts.

Given that over 94 percent of the world’s population will be represented, this year’s Expo is a vital platform for debate and a forum to explore shared solutions to one of our planet’s most pressing issues: how to provide sustainable food security for everyone.

The theme also invites visitors to reflect on the contradictions present in world nutrition, such as malnutrition and obesity, fast food and slow food, commercial food farming and the shocking statistics of food waste. Topics such as the environment, the culture of food consumption, climate and energy will be key. The idea is also to seek solutions, particularly through new technology. The theme will be complimented by the quirky presence of “Foody”, the official Expo 2015 mascot, and his buddies.

The program consists of thousands of events and activities created with the help of many international partners organisations, including both the EU and the UN. Visitors will be invited to take a look at nutrition from an international perspective by sampling the world’s best dishes, discovering different food traditions and learning about what’s new in agriculture and harvesting.

The exhibition site, designed by internationally renowned architects, has been based on none other than a typical ancient Roman city-plan, with the main streets intersecting in the “forum,” or in this case, Piazza Italia. The site will include a solar-powered open-air theatre that will host shows, concerts and ceremonies, a Mediterranean Hill, which will be adorned in vegetation specific to the Mediterranean landscape, and the Italian Pavilion, where Italy’s rich food culture and tradition will be displayed. There will also be thematic areas, such as The Future Food District, described as “a micro universe which presents possible scenarios for the application of new technologies at each step of the food chain,” along with a bio diversity park and an area dedicated to food and the arts. Last but not least, guests can also explore the so-called “Clusters” or mini exhibitions within the Expo. Each cluster is a “community” of several countries united by a common theme such as “Island foods” or food group, such as chocolate or spices, to create a unique and educational display. With an aim to leave a legacy, Expo Milano promises to be an event for change.

Expo Milano 2015 will stage various fixed events every day in different areas of the Site.
Here they are:

11.30 THE MASCOTS’ DECUMANO PARADE
Foody and his friends (Expo Milano 2015 mascots) will star in a spectacular parade enriched by dance, music and special effects, all connected in some way with Expo’s themes. The show will last 30 minutes.

1.30 pm COOKING SHOW
Every day, at the Expo Centre at the Western end of the Decumano, a public cooking demonstration will be staged.

4 pm THE MASCOTS’ DECUMANO PARADE
The parade of Foody and his friends (Expo Milano 2015 mascots) is repeated in the afternoon. This show too will last 30 minutes.

4 pm ACTIVITIES IN THE CHILDREN PARK
The Children Park is a permanent home to eight different installations for children, and during the afternoon it also organises animation activities.

9.15 pm to 10.30 pm ALLAVITA! – CIRQUE DU SOLEIL IN THE OPEN AIR THEATRE
From Wednesday until Sunday the Cirque du Soleil presents a new production created exclusively for the Universal Exposition. The production will continue from mid-May to 30 August in the Open Air Theatre. ALLAVITA! Is made up of 14 spectacular scenes and combines contemporary creative circus with theatre, dance and clowning.

Every hour:
At Lake Arena, the circular lake with the Tree of Life in its centre, Expo Milano 2015 will stage a breathtakingly spectacular light show.

Click Here to check out the events of Expo 2015

Exposition Site: The Universal Expo is on the North West side of Milan in the adjacent suburb of Rho, situated a few kilometers from the center of Milan, in an area directly connected by three main city airports and by principal public transport lines. The Site is easily accessible by international and local travelers alike through a highly connected transportation system. Expo also collaborates with partners Alitalia and Trenitalia who are its official carriers. 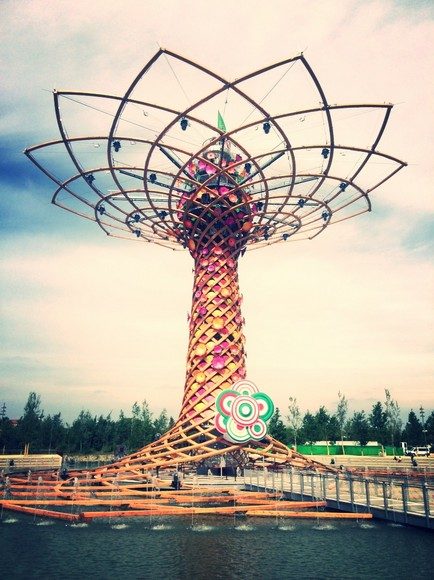 Maya is a happily unrooted Nepalese-Ukranian Norwegian, hailing from a small island above the arctic circle. After getting a degree in Journalism from Cardiff and Amsterdam, she moved to Rome where she has had various stints at Scando organisations and is now working as a freelance writer and illustrator.