Michelangelo’s final sculpture has a new special home in Milan

An unfinished sculpture with an unsettled past finally has it’s own resting place. In the newly restored and especially designed space of the old Spanish Hospital in Castel Sforzesco, Michelangelo’s last sculpture will be displayed for the public. The Pieta Rondanini is Michelangelo’s alternate version of Mary holding the body of Christ after His crucifixion. After a lifetime of accepting commissions for others, the artist worked on this sculpture just for himself. He intended it for his own grave, in fact, working on it intermittently from 1552 until his death in 1564. 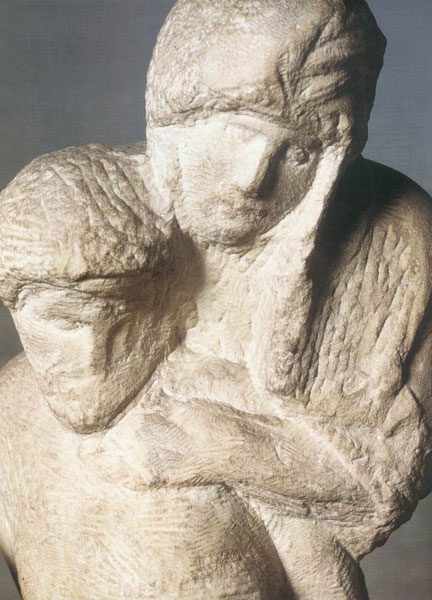 Found inside the grounds of Castello Sforzesco, the Ospedale Spagnolo’s interior has been redesigned for the purpose of holding the Pieta Rondanini by architect Michele de Lucchi. The Milanese architect, famous world wide for a large body of works in Italy and abroad, has insured the space in which the Pieta can be viewed will offer the most rewarding of experiences. Viewers will enter the room, first seeing the sculpture from the behind, allowing for a journey around it to reveal the full emotive power it holds. The unfinished bodies contort together, the head of Christ is sculpted directly from Mary’s shoulder. It cannot necessarily be said there is any autobiographical quality to this sculpture, however being it was a work Michelangelo had abandoned and then revisited just weeks before his death suggest an awareness of his mortality, impending so.

Perhaps the very embodiment of what Michelangelo meant when he said “death and love are the two wings that bear the good man to heaven”, see the Pieta Rondanini from the 2nd of May, a special premier date coinciding with the Milan Expo.