The Scala Theater, built in 1778 in the center of Milan, is one of Europe’s top Opera Houses and a real pearl of neo-classical architecture.

The Scala Theater, in the center of Milan and tucked at the North end of the Galleria Vittorio Emanuele II in Piazza della Scala, is one of Europe’s top Opera Houses and a real pearl of neo-classical architecture, that is, particularly the inside. It’s true, the Scala does not look remarkable when you are glancing around the Piazza della Scala and wondering where the tuxedos and stilettos are going tonight. But step inside and it is all marble, gold, and red velvet. Floor-to-ceiling mirrors augment the feeling of its size when you stop to drink a cocktail in one of the halls. Unfortunately you wont be able to step inside without some kind of a ticket.

Luckily, you don’t have to spend your entire entertainment budget just to get inside the Scala. The website posts discounted tickets for operas and recitals. There is a museum and backstage workshops open during the day. Or keep an eye out for free or inexpensive special events such as workshops, matinees, and recital performances.

The theater is actually older than the Republic of Italy. It was built in 1778 when Milan was under the Austro-Hungarian Empire. Italy’s best Opera heritage all had careers, expositions, and heritage in the Scala: Rossini, Bellini, Verdi, and Toscanini.

The museum boasts antique and significant musical instruments (such as Liszt’s piano and two of Verdi’s), masks, as well as paintings and busts highlighting opera greats. You can expect Giuseppe Verdi to be particularly worshipped as Italy’s top contribution to Opera. His funeral mask and a mold of his right hand are perhaps a reward to those who made the opera pilgrimage. 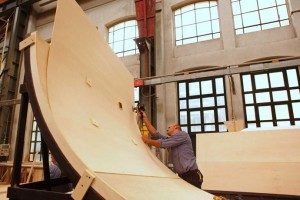 If you are curious about the theater’s backstage life and all of the art and skill that goes into making a world-class theater performance, then good news, there are tours available twice a week of their three large workshops: the Benois Pavilion, where the scenery is built, sculpted, carved, and painted; the Caramba Pavilion, where the costumes are designed, assembled, and washed; and the Visconti Pavilion, a massive stage and rehearsal space for the chorus.

These three pavilions combined are a 20,000 sq. m. facility called the Ansaldo Workshops, and they are now open to the public but you must reserve ahead of time. More than 150 professionals of various arts and trades work here every day according to the Scala’s website.

Tours on Tuesdays and Thursdays at 3pm

When it comes to the performers on the Stage, the Scala has its own Opera company, Ballet company, Orchestra, Chorus, as well as an Academy which provides training for young professionals to enter the fields of running, managing, contributing artistically to, and performing in theater. Check out the calendar to find your preferred performance.

To get here, you can easily walk from the Duomo metro station MM1 or Montenapoleone MM3, bus 61, or take trams: 1 or 2